A place where lazy bloggers can come and feel better about themselves. The rest of you are welcome too.

Stuck on repeat in my house...

I've spent the morning watching Cake Boss and eating cake. Like a boss.

The next great adventure.

This afternoon Remy and I were at a birthday party for one of his school friends.

There was a young woman there, dressed as Ariel, the mermaid from the movie The Little Mermaid.

She was all youthful loveliness and light, wearing a tiny and very sheer mermaid dress. She was patient with the kids and even made them balloon animals.

Then she gathered the children around her for story time.

About twenty kids aged three and four years old sat on the floor in front of her with their legs crossed and a look of expectation on their precious cake-stuffed faces.

She opened story time in a breathy voice with "Who likes adventures?", to which every kid but one said "ME!". And that one kid? "I like death", he said loudly.

Without a pause she looked that boy in the eye and said "To the organized mind, death is the next great adventure".

Lightening man goes to a party! 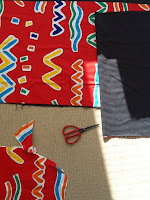 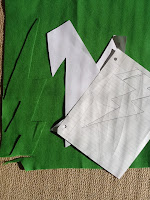 Remy's BFF turned four on the weekend. We were still lying around in bed late on Saturday morning when I realised that we hadn't bought the birthday boy a gift and we were due at his party in ...ooo, let's see... no time at all.

We chatted about what the BFF likes and Remy came up with the idea of making him a cape with a lightening bolt on it. What a fantastic idea! So we got to work.

Fortunately, there was a bunch of fabric still lying around from the pirate costume I made for Remy's birthday, so we choose a bright, patterned red for the lining (this is the part that contains all of Lightening Man's powers don't cha know?), and this very odd charcoal-coloured suiting material for the outside. (You know, I'm sure that I must have bought that fabric but I have absolutely no memory of what I actually bought it for. And it is nasty stuff! All polyester blend, stretchy, slightly scratchy awfulness, but totally fine for something that will probably get thrashed anyway).

It was at about this point that Remy collapsed into a heap and demanded that he too have a cape with a lightening bolt on it. Of course. It's perfectly reasonable to expect that I could just whip up two capes in a morning. Or something like that.

Boyfriend came to my rescue by fetching me a coffee and taking Remy off to the park. Ah, peace at last.

I cut the two pieces of fabric into my best guess of a symmetrical rectangle. I dug out some green felt and cut out an approximation of a lightening bolt, appliquéd it to the ghastly grey fabric. I sewed  the two rectangles together (with some elastic in the top corner), leaving a small gap in the side to be able to turn everything the right way out. Once I had trimmed the corners and straightened things out, I topstitched all the way around, still leaving the gap in the side. I sewed a tunnel for the elastic, pulled the elastic tight and sewed up the opening. Voila! It worked! 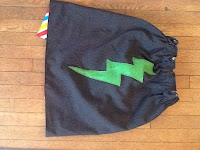 All that was left to do was make a button hole and sew the button on. And make a second cape. And make and eat lunch. And get ready for the party. And get to the party on time.

Of course, this was all NO TROUBLE AT ALL and we did all those things smoothly and perfectly and like we do this sort of thing every single Saturday ever.
Unfortunately I didn't get any photos of the birthday boy wearing the cape. Once we walked in the door, it was pure birthday party chaos (and loads of fun).

We have another birthday party to go to this weekend. We haven't bought a present for that party yet.
at 10:44 AM 5 comments: 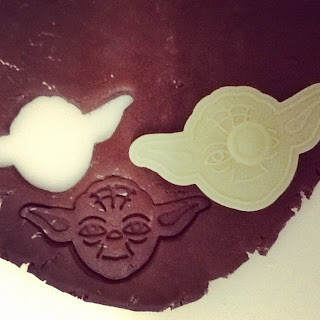 Remy and I have been hitting the oven lately - we've never baked so many cookies before. My gym membership is the only thing between me and an early death from cookie overdose.

We popped into the local Williams-Sonoma to pick up a candy thermometer and saw a box of Star Wars cookie cutters. While I was a model of restraint and frugality in the shop, as soon as I got home I got to googling them. I ended up getting them half-price and now these bad boys are ALL MINE!

On the box the cookies are decorated with very fancy pants icing ... which I can't for the life of me work out how to do ... but they look super un-iced anyway.

I used this recipe from Smitten Kitchen - one of my favourite cooking blogs - for Brownie Roll-Out Cookies. I used salted butter, so I halved the amount of salt and I used the amazing dark cooking cocoa from Ghirardelli, a chocolate company here in San Francisco.

Delicious! And guaranteed to totally blow the minds of four-year-old boys. 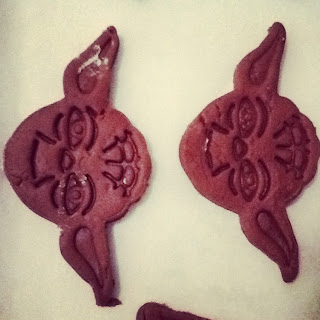 Don't make me do it!

So now I have a definite date for going home.

But NOOOOOO! I don't want to leave! I want to stay in this fabulous, vibrant, exciting city forever. US immigration have other, non-negotiable ideas. Damnit.
at 10:24 AM 3 comments:

Sometimes the art is in the detail.

The sun is shining through the window onto my back and into my hair. I'm in another phase of giving up coffee, so I have a latte in my hand. The Picasso exhibition I've been to this morning is still moving in my brain. I want to know more about his life, definitely more about his lovers but it appears that Picasso lived his life in four parts that retail for thirty dollars each.

And that's the trick of the museum shop, isn't it? Capture people when they have been broken open by the creativity of others and convince them they can possess some of the greatness. But why must the greatness be inevitably stamped onto magnets? Or impractically small notepads?

In the same cafe, the young woman across from me is eating her cookie as if she were a gopher - all hunched shoulders, two hands holding her food, big teeth bared, taking tiny nibbles until she has nibbled the unfortunate cookie ragged.

The two of them don't talk. As the young woman gets up and walks away she could be mistaken for a woman much older; she is bowed by age though she must be less than twenty.

An elderly couple sits close by too. Their rings are thin slivers of gold; the edges of the rings were soaked up by surrounding skin over the many years of marriage.

A proud grandmother struts past pushing her new granddaughter in a pram. Her daughter, the mother of the baby, half walks, half skips to keep up. Her mother is racing away with the baby; her mother is so happy to be a grandmother at last that she doesn't really care.

I can't sit here any longer. The latte is finished; the little cookie has been eaten. I'm off to happily wander in Golden Gate Park.
at 9:49 PM 1 comment: